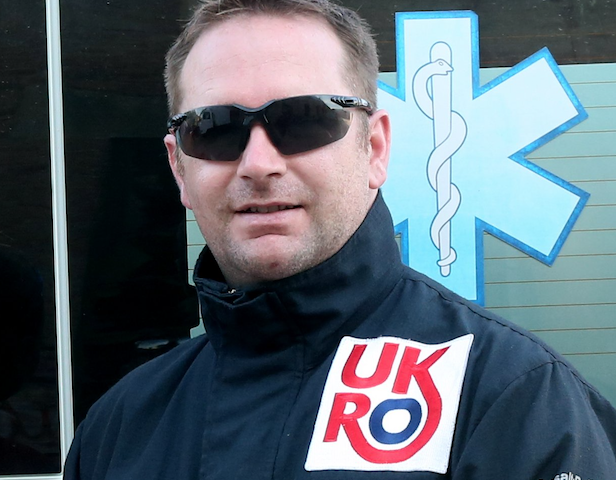 I am employed by West Midlands Ambulance NHS Foundation Trust and have done so for just shy of 20 years. My current job role is Clinical Team Mentor for the HART Team within West Midlands. I have been a HART Operative for 5 years now and have skills such as BA Instructor, SRT Level 3 qualified, USaR Paramedic and Safe Working at Height qualified. In 2015 I was selected to represent the UK HART Team in Canada for an International Multi Agency Exercise with Australia, Canada and the United States of America<

I have been part of the UKRO team for 3 years where I started off as an Interior Assessor and progressed on to becoming a Trauma Assessor. Within the Trauma element I have assessed many regional and national challenges within the UK. I have also assessed at World Rescue Challenge 2014 in Moreton-In-Marsh and 2015 in Portugal. I have also had the pleasure to assess in Luxembourg 2016 for the National Trauma Challenge. I am also qualified to assess the Medical aspect of the Extrication challenges.

I have been part of the Moldova IDP Team for 2 years now. In 2015 I delivered Trauma Training to 6 of their medics and on the last day put them through a Trauma Challenge. In 2016 I was fortunate to have another 6 medics where 4 of them I had previously taught in 2015. This time I concentrated on the medical extrication topic. Also on the last day of this programme we put on a standard extrication challenge with the top two teams competing again in a complex scenario with two victims in the same compartment. I was overwhelmed with the standard they reached. So much so that the winning team was told that they would be supported to participate in the Romanian National Challenge 2017.

Like other IDP programmes I have been part of I am going out there with an open mind. My first day or so I aim to scope out at what level the medics are and tailor the training. I will be delivering best practice whilst doing the medical training. My aim is to help improve RTC victim’s outcomes within the Serbian area.